The company MBA S.A. - ARGENTINA known in the Military Aeronautical environment of South America as “Centre of Excellence for Maintenance of Martin Baker Ejection Seats” and with more than 20 years of experience carrying out sales, inspections, trainings and assembly of Ejection Seats of the MARTIN BAKER family, has managed the development at “National Level” of Oxygen Systems and Test Benches and Charging Benches of pressure gases for Aeronautical Application.

The initial development consists on an Emergency Oxygen System (EOS) suitable for use in Aircraft Escape Systems (Ejection Seats). For this, MBA S.A. - ARGENTINA has a team of Technicians and Engineers with wide experience in Aircraft Escape System Components (Ejection Seats) and its subsystems. In order to expand the capabilities of the company, a process of study and incorporation of Standards Libraries and Technical Specifications, Hardware and Software for design, adaptation of infrastructure (Clean Area for handling O2) and equipment of the Workshop were carried out.

This ambitious project is in the phase of “Manufacture of Prototypes, Approvals and Tests to begin the Certification Process”, which, at the beginning, will be directed to the General Direction of Joint Airworthiness (DIGAMC), under the Ministry of Defence, and then, it will continue with the certification processes in other areas and countries (UK and Italy). The initial objective of the Project is to satisfy a demand generated in the Latin American Military Market, because of the end of life service Oxigen Systems of the EOS Systems that originally equipped their ejection seats. The idea is to offer national alternatives to replace and support these equipments, which originally were Imported, with similar quality and benefits, and with better and competitive prices appropriate to the Region. 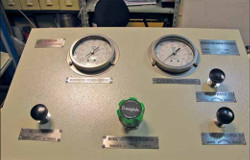 Moreover, with this line of products, MBA S.A. - ARGENTINA is profiled to Integrate the Aeronautical Industry by offering Oxygen Systems and EOS components to equip national and foreign production aircrafts. The evolution foreseen by MBA S.A. - ARGENTINA is towards the National Integration of the Oxygen systems that equip the Military, Civil and Commercial Aircrafts, in order to satisfy the national and the international markets as well.

Complementary, and related to the Emergency Oxygen Systems, MBA S.A. - ARGENTINA has developed Charging Benches for O2 and CO2 tubes, as well as an Hydrostatic Test Bench for the Testing of Cylinders for High Pressure Gases, EOS or others, complying with the corresponding Standards.

Description and Technical Specifications of the EOS System developode by MBA S.A. ARGENTINA

The Emergency Oxygen System consists of a seamless steel cylinder to store oxygen at 2100 psi., designed and built under the DOT3AA Standard and equipped with a regulating head that has a system of mechanical rupture of a capillary, a regulator / flow restrictor, two sockets for mounting the pressure gauge (for readout in top-mounted or read-inhead-down mounting), a filler valve with anti-return cap and stopper, and inspection cap.

For MBA S.A., it is essential the compliance of ethical guidelines.